How Grace and I Met

My girlfriend Grace Goon and I are celebrating our six-month dating anniversary today. We thought this would be an appropriate time to share how we met and started dating. We’ve color-coded who was writing at the time; it should be easy to figure out. Enjoy!

One fine day, I received an email:

Cap’n Gerald, th’ sharp-tongued wench Alice and I gunna be cookin’ up a Korean barrrrbecue dinner this here Friday, Septembarrrr th’ 19th, ready to be devoured after 7 hourglass cycles have passed since midday. We be dockin’ in the port o’ Sidney and Pacific, in the fifth floor kitchen, and ye be invited to parrrrtake in the plunderin’!

If ye be kind, float me a letter in a bottle notifyin’ me of yer enlistin’ in this here crew. Fare thee well!

To welcome the new first-years to the Graduate Christian Fellowship, we older students in the fellowship teamed up in groups to cook meals in groups for the first-years. As we were planning, Alice suggested that we find a dress-up theme, and Gerald discovered that the day we’d be meeting would be International Talk Like a Pirate Day! So we decided to fashion our e-mails and costumes in that style… 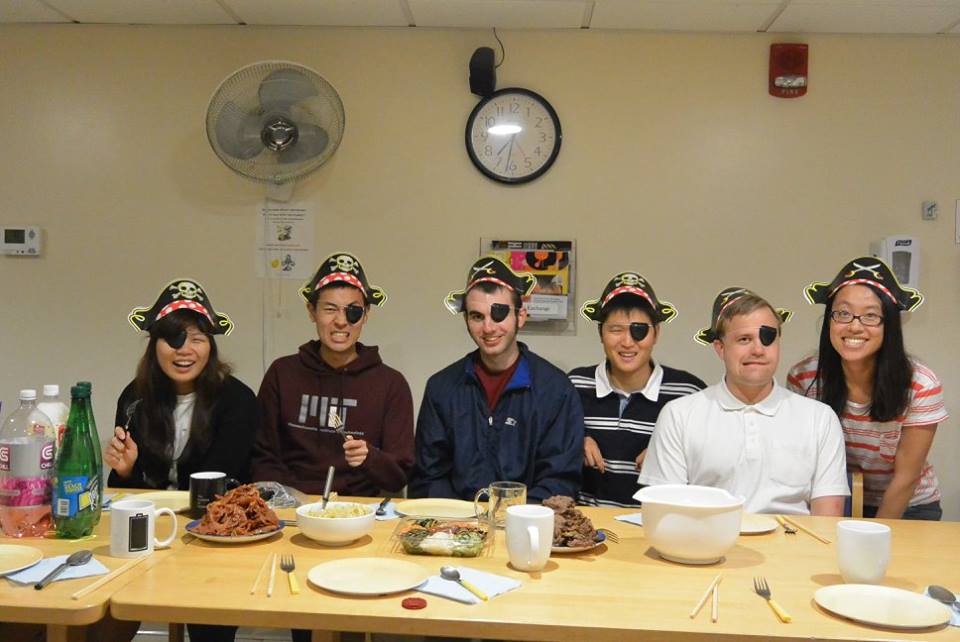 (Grace is on the left, I’m second from the right with a weird look on my face…)

That was a particularly bad week for me because (long story short) things were not going well with my previous research advisor and me. At that point of time, I was already having thoughts of dropping out of grad school. So I almost forgot about dinner, but still managed to make it in time in the end. Then I met Sam and everything changed (just kidding, I was still thinking of going home for the next two weeks).

After dinner, we played a get-to-know-you game, where one person would ask a question, everyone else would answer it, and the asker would have to guess which answer came from whom. I remember getting the distinct impression that she was a geek from an answer mentioning comic book stores.

One of the questions Alice asked was “if there is a fire and you could only save one thing, what would you save?” The first thing that came to mind for me was all the random letters and souvenirs I collected during my time in Cambridge, but that would be too many things! Sam’s answer was “drawer of keepsakes” which made me think of him as really sentimental.

We meet again and again

We later ran into each other again at a couple board game nights started by a Caltech friend of mine named Helena. Through one of her labmates, Guang Hao (who also knew Grace from Cambridge), a bunch of Singaporeans got involved in the group, and one of them invited Grace in, too.
Yayy board games! That was something I wanted to join here and was glad that there is a game group right here at Sidney-Pacific! I went for one of the board games sessions and Sam was there as well! (I hadn’t really noticed him at that point of time though) We then met a few more times. We even played together as a team for my first 7 Wonders game. There was then this Resistance game when Sam was one of the spies (bad bad spy) and I was the ONLY resistance who suspected him! But Sam was so good at lying (tsk tsk) that he still managed to convince everyone else.
I had a second chance to deceive her (muahahaha) at a Murder Mystery Party in our dorm, Sidney-Pacific. It was an interesting night, as we each were given roles to play and information to tell people, then someone died and we had to figure it out. As it turned out, I was the murderer, but I was able to keep myself concealed, though Grace almost suspected it.
Sam was playing the bad guy again! And I kind of suspected him for a while, but of course we know how good he is at lying (tsk tsk). 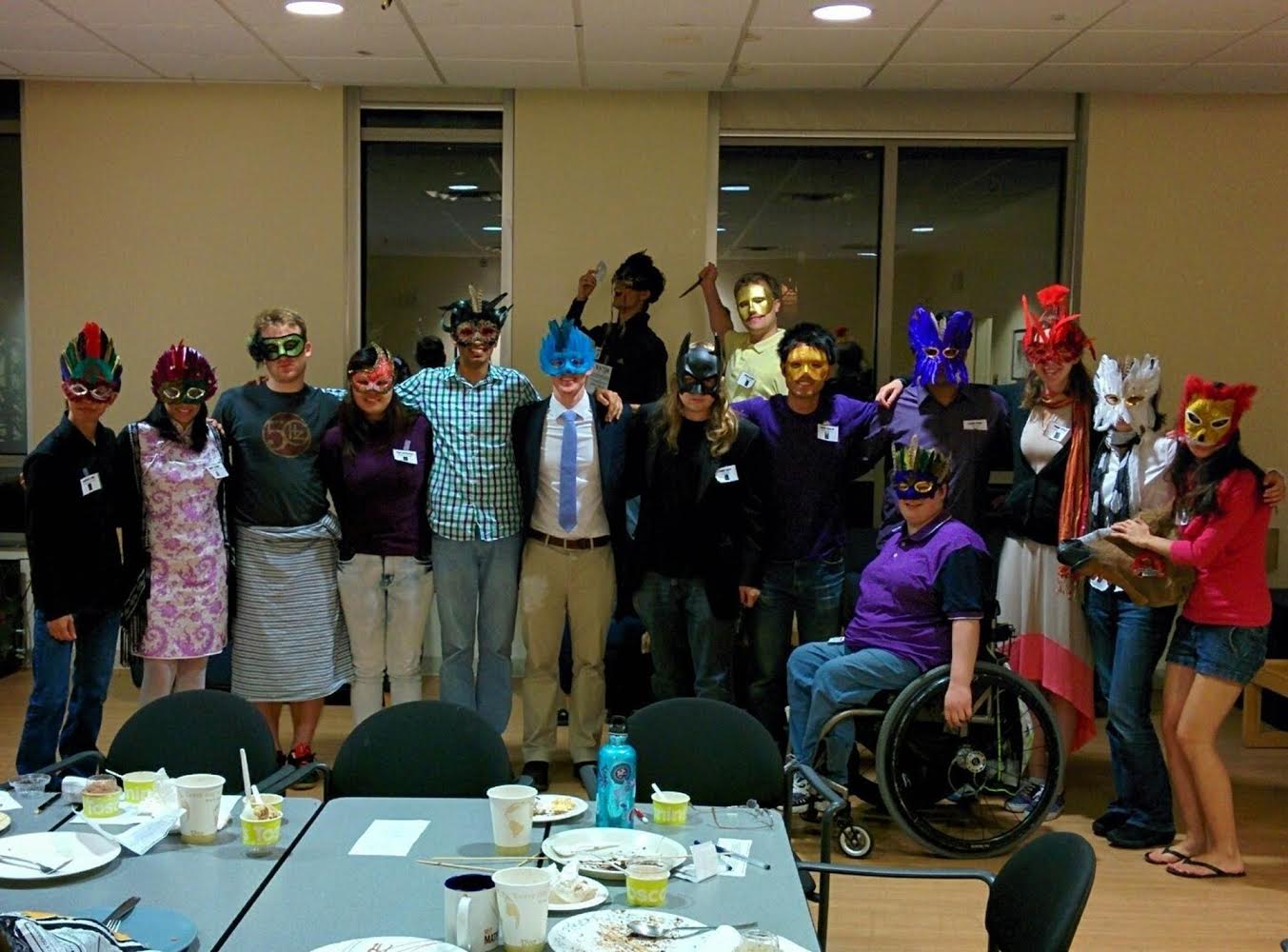 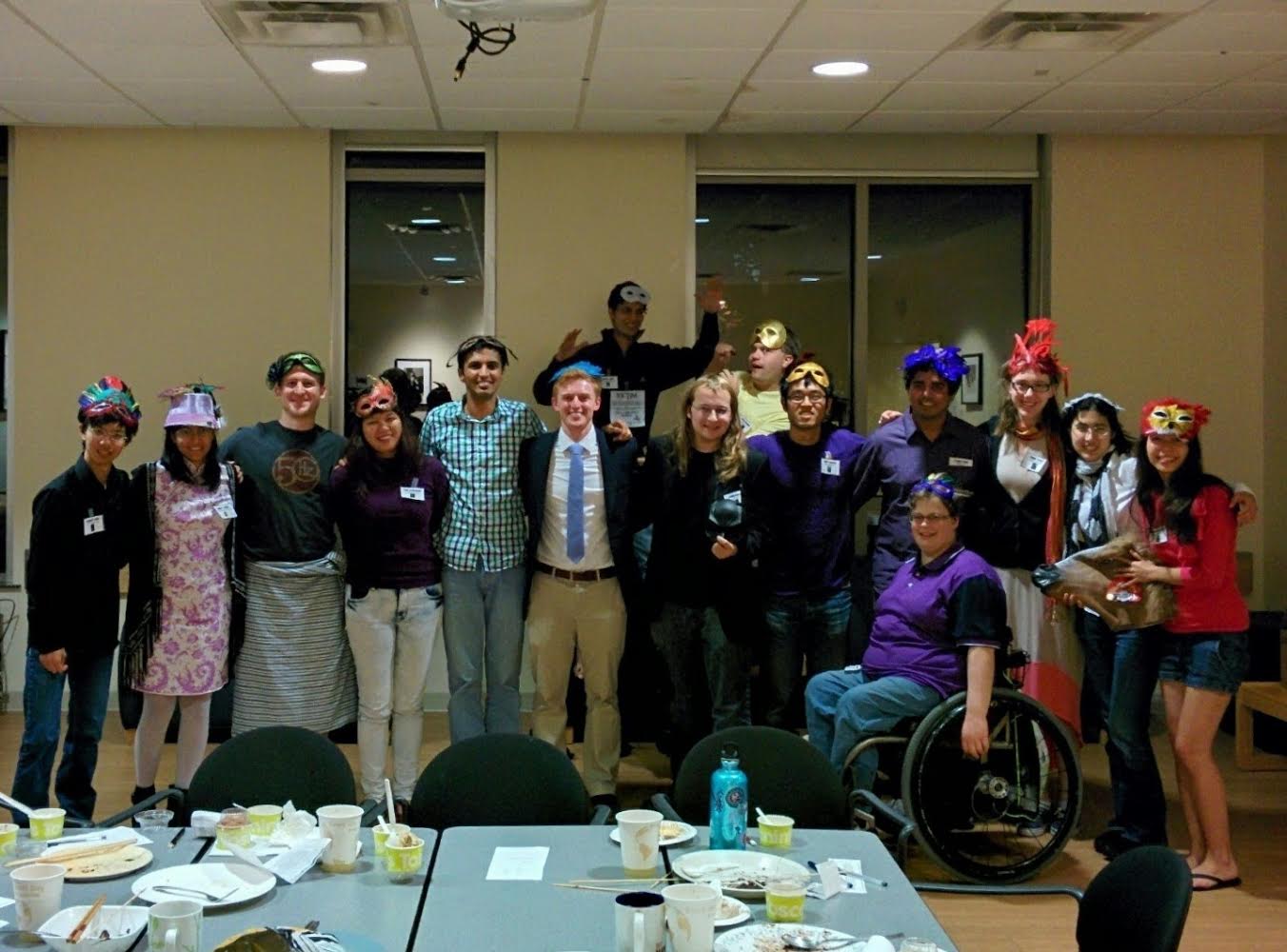 Then it was the week before Halloween! My friend, Linh, and I were brainstorming about our Halloween costumes. So being a Star Wars fan, I initially wanted to dress up as a Stormtrooper. Then Linh convinced me to dress up as a female character in Star Wars. So I posted “Padme or Leia for Halloween?” as my Facebook status and Sam was the first one to comment. Linh of course picked up on the comment and started looking at Sam’s profile. Our conversation went something like this.
Me: I think he is pretty cute
Linh: (looking at profile) eh not bad ah. Go for him!
Me: erm….
A few days before Halloween was Guang Hao’s birthday, and Grace and I both went to his birthday dinner. We ended up sitting next to each other, and I decided to ask her more about her faith and churches she had visited in Boston so far. Later, the two of us ended up switching tables when we split into two, and had a lot of fun trying to pick up our water glasses with chopsticks. I always seem to end up doing silly random (but fun) things like that when I hang out with Singaporeans. 😛 Here’s the picture we took all together at the end: 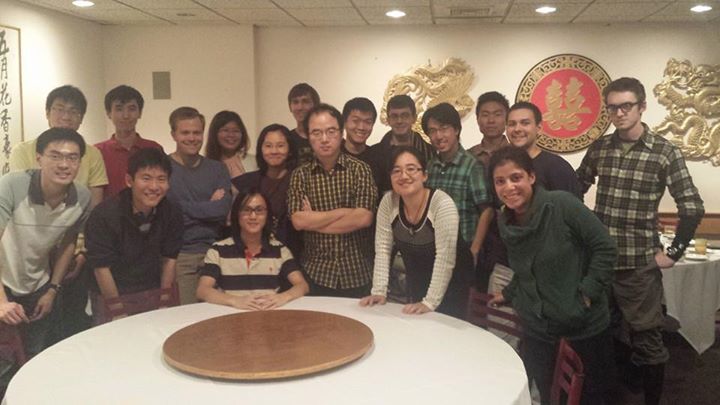 We sat together and Sam caught my attention for the first time because he asked me a lot of questions about my faith and church. Part of the reason was because I had just decided to stay on at MIT and was looking for places I can serve and grow spiritually. Anyway, Sam was all super enthusiastic about his church and GCF: “You should come to my church! You will like it!”.
Later that night, my conversation with Linh went something like
Me: You remember that Sam guy who commented about my Halloween costume? He kept talking to me at the dinner
Linh: AHHH (looking at the picture above) waa not bad, potential boyfriend ;P
The next day, I received a Facebook invitation to a joint GCF-ACF Large Group from Sam. Then I showed up!
Haha, Grace was one of only three of us GCFers who responded to the Facebook event invitation (along with me and Gerald, our president). ACF communicates events that way to their group, but us old grad students can’t be bothered to reply on Facebook, except Grace. 🙂

Hints of something more…

So when did we first start liking each other? On my side, it was pretty gradual. I “noticed” her the first day we met, in a sense. But I’ve “noticed” quite a few girls like that who I wouldn’t say I “liked” — meh, it’s all a gradient. From my perspective, at this point, I was just getting to know Grace as a friendly fellow GCFer, encouraging her in her faith and to grow closer to the community we have in GCF.
It was pretty gradual for me as well. We happened to meet each other at various events/gatherings pretty often. And as I mentioned, I noticed him at Guang Hao’s birthday party. However, there wasn’t really much one-on-one conversation or interactions for me to say that I like him, but I was of course interested to get to know him better as friend and brother in Christ.
Taking a cue from Sam Perli, I was planning a big birthday party for myself, the day after my birthday, November 8th. I invited friends from at least six different social circles to come together, eat dinner and cupcakes (paid for by my parents!) and play board games!
I was initially unable to attend Sam’s party so I thought I should just drop him an email and use that as an excuse to meet and have ice cream! Linh ended up typing out the second part of my email.
Hey Sam!
I don’t think I can make it for the party next week ): but I would totally get you ice cream for your birthday! Toscanini? Let me know!
Cheers,
Grace
I starred this e-mail to get back to later. Ice cream in November didn’t exactly inspire me… but I also figured that I’d wait until after my party to take her up on it.
AND THERE WAS NO REPLY FROM SAM!
But I found out later that my weekend trip became a day trip on Sunday, so I could make it after all and RSVPed.
After the birthday party, I posted some pictures on Facebook, including these of Grace: 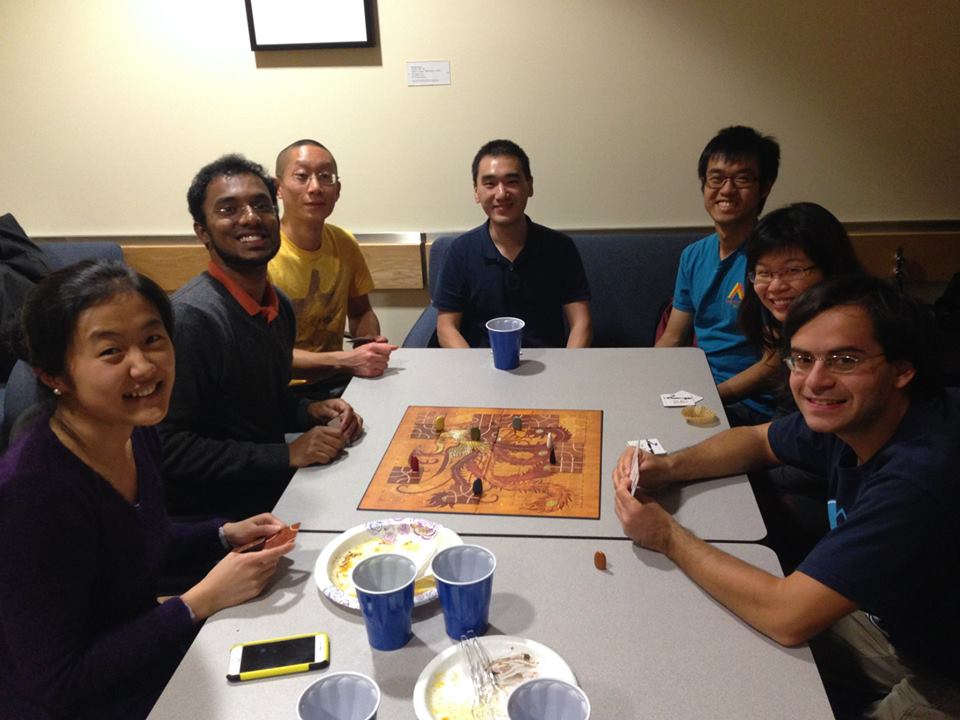 This picture is nice because it illustrates a bunch of the different parts of my life people there were from: from left to right, Xiaowei (Sidney-Pacific), Sam and Nigel (GCF), Martin (church), William (frisbee), Grace, and Yasha (math department). 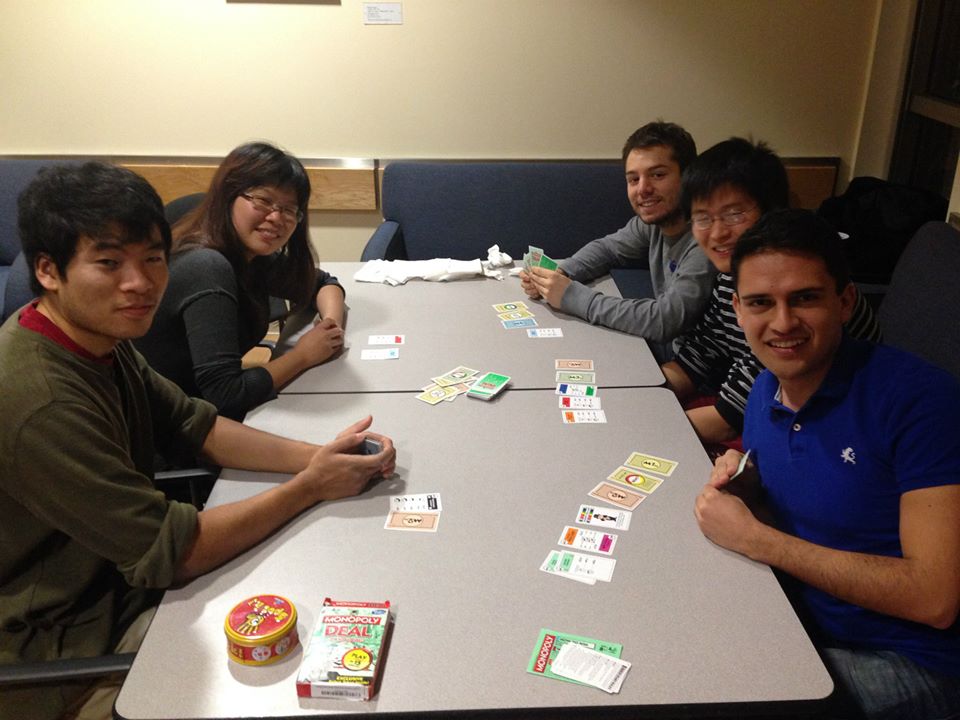 Grace stayed later in the night, though by that point people had sorted themselves and all of the Monopoly Deal players were GCFers.
On Facebook, Grace sent me this message:
Hey! Saw the pics for the party it was awesome and had a lot of fun playing the games!
Thanks for hosting and hope you had a fun time
See you at board games!
I suspected that she was interested in me… but wanted to get to know her better first. I simply replied:
Yay, I’m glad you enjoyed it! I definitely had a lot of fun. 🙂
That evening, I finally got around to stalking her Facebook profile, and noticed her blog! I asked her about it and we had a long and meandering conversation through her hope of going to South America to take more pictures, my sister joining the Peace Corps there, the missions trip I went on to Taiwan, and missions trips in general. We eventually moved the conversation to Gchat, which I prefer.
A week later, I asked Sam about the Taiwan trip and he sent me this 53-page Word document about it. That was when I first discovered how long-winded he is. And also how much he likes to document things.

Like Loading...
Personal Experience, Weekly Post anniversary, dating, dtr, love, love story, romance
← What Are You Building? How Not To Lead, Part One: How Not to Delegate →

7 responses to “How Grace and I Met”