John Kasich is back in the media spotlight this week, touting his campaign reflection, Two Paths: America Divided or United. He was in Cambridge on Wednesday, giving a talk at the Harvard Kennedy School and signing books at the Harvard COOP. Grace and I went early enough to get a picture and briefly chat with him. 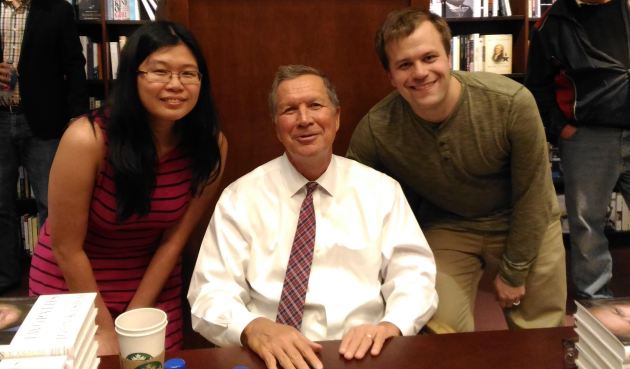 The event organizers explicitly told us all that we weren’t supposed to talk or take pictures (“only from the line”), but as I suspected and saw for those ahead of us, Kasich wouldn’t have had it any other way.

When I first found out about this book about a month ago, I immediately pre-ordered it on Amazon. It finally arrived on Tuesday; I read the first three chapters before the book signing on Wednesday, and I just finished reading it last night. This eagerness probably doesn’t surprise many of you since my pro-Kasich blog post back during the primary season, but I was really curious to hear his perspective on the campaign from the inside. I also thought it’d be helpful to others to review it this early, hence why I made sure to finish it in time for my post this week. END_OF_DOCUMENT_TOKEN_TO_BE_REPLACED