The Highest Form of Flattery

Think about this for a second. Maddow is as liberal as cable news commentators go, but she still considered Roger Ailes a friend, going so far as to credit him with essentially inventing the way we process politics through polarized cable television. She admits to asking him technical questions about colors and angles, but I’d expect that wasn’t the only thing that liberals’ version of Fox News learned directly from Ailes.

This isn’t just Maddow’s anecdote. This week, Harry Enten of FiveThirtyEight chronicled how Ailes’s Fox News not only created a channel for conservatives, but drove the polarization of other channels:

Fox News even gained an imitator: MSNBC. Seeing Fox News’s success on the right, MSNBC lurched leftward in the mid-2000s. It seems to have paid off. In the December 2016 Suffolk University poll, those who said MSNBC was their most trusted news source were almost exclusively Clinton voters in the same way that those who chose Fox News were almost exclusively Trump voters. With Trump in the White House, whether or not they admit it, MSNBC is riding the Ailes model of opinion programming to record ratings.

I can almost picture Roger Ailes as a sort of Emperor Palpatine figure from the Star Wars prequels, inflaming both sides of a civil war in order to gain power. On the one hand, he played this very public role at Fox News, but on the side, he secretly met with Rachel Maddow to cultivate the liberal opposition.

“Use the colors of red and blue — that’s how people will know it’s politics. But most importantly, make your viewers feel like they learned something, even if your main intention is to enrage them.”

The feedback cycle is pretty easy to see. By pushing the mainstream media to actually be more liberal, conservative perception of media bias and dependence on Fox would only grow. And with a growing political divide, more on the right would favor the breaking of norms that could grant the president emergency powers…

“Always two there are. No more, no less.”

Unlike the Sith, though, another aspect to Roger Ailes’ influence on the industry was recasting politics as entertainment. This progression, culminating in putting an entertainer in the White House itself, has its own left-wing imitation in late-night comedy. The more political an act, the better these days. Liberals, moderates, and terrified conservatives have been self-medicating on the likes of Colbert.

And then there is #TheResistance. Deliberately self-styled after the Tea Party movement, groups going by the name Indivisible have sprung up across the country to, well, resist. Just like the calls to repeal and replace Obamacare, the opposition has consisted in one message and one message only: 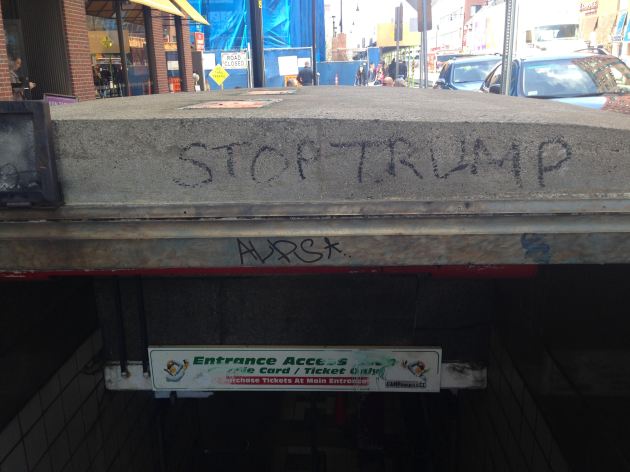 Never mind that the Tea Party wasn’t really that successful, except when it came to driving a rift down the middle of the Republican Party that still stymies them to this day. Trump’s electoral college victory came with majorities in the Senate and House, but nowhere near the mandate or margin that Obama had in 2009.

Yet it’s curious where this attempt to learn from the opposition ends. In normal circumstances, I’d be happy that the left and right are talking to each other. Liberals and conservatives each have their own blind spots when looking at the way the world works. In processing the disappointment many have with the last couple decades, for instance, conservatives tend to ignore the role of economic inequality, while liberals ignore the problems of social decay.

But I’m no fool: This isn’t a meeting of the minds intended to find win-win solutions. This is one group lifting the techniques of the other, techniques that actually make such cross-collaboration harder to achieve rather than easier. It’s one team realizing they can get away with fouling the other without attracting the ref’s suspicion, and the other team deciding that is a good strategy and imitating it.

Let me be clear: The perils of the Trump presidency has and could make keep me up at night. They make it hard to avoid my eyeballs being glued to Twitter as I read everything I can about his latest weeks of scandal.

But as I step back, the problems just keep coming back to polarization. Why are so many Republicans still sticking with Trump? Polarization. How was Hillary Clinton able to find so many enemies? Polarization led both factions to be dissatisfied in her for opposite reasons. In many ways, the problems we face today are not that hard compared with the depressions and world wars of the past. But we’re never going to solve them if we just keep shouting past each other.

Thankfully, the world is starting to become aware of this underlying problem. Let me give just two hopefully inspiring examples.

I’ll start with a movement closer to where I am now, academia. In 2015, Jon Haidt of NYU and others started Heterodox Academy, an organization and blog aimed at reducing the homogeneity of political viewpoints in universities. As they tell it, the academy has shifted leftwards in the last 20 years as conservatives in the the Greatest Generation were replaced by more liberal Baby Boomers. But rather than simply oppose and condemn liberal academia, they seek to change it from within, grading universities on their viewpoint diversity and equipping students to wrestle with a wide variety of views.

There are also promising signs in the culture at large. This Heineken commercial made waves about a month ago, and for good reason.

Viewpoint diversity and simple conversation with those who believe differently from us are just two of the first steps along the road to healing our divide, but they’re important steps to take.

One response to “The Highest Form of Flattery”